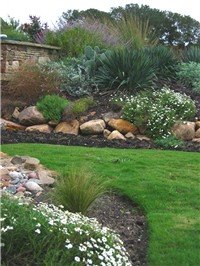 Drive around North Texas after the scorching summer we have experienced and you might think you have died and gone to the surface of the sun. Long-time traditional landscape staples like Indian Hawthorne (which we don't advocate because they are non-native) literally became crispy in the hottest, driest summer in 50 years. Holly bushes blanched, many traditional landscapes look deep-fried. Many of these homeowners are now interested in trading in their dead or dying plants for thriving native ones.

One of our most supportive clients lives on acreage in Lucas. His project has been on the NPSOT tour of homes 2004-2006. He calls it his "dummyproof" landscape, because he does nothing to it except bring us out a couple of times per year to trim perennials and apply mulch. Easy. The reason his garden is low-maintenance is, we used plants native to his area that will thrive in full sun, well-draining soil, and bone-chilling wind rolling off the prairie in winter. Of course, we used a few adaptable plants like Knockout Rose and Copper Canyon Daisy. But like all our projects, approximately 85% of the plants in his garden are native to his slice of the Blackland Prairie.

Plants like Blackfoot Daisy and Four Nerve Daisy provide interesting foliage, colorful blooms and/or sweet fragrance. Little Bluestem Grass is a four-season plant. Its silvery-blue foliage during warmer months is striking, especially when planted in a large swath. In the cooler months, its bronze color livens up the garden. Neglect this plant and it will thank you. Sometimes, if you 'baby' it, it will flop over.

A great plant for sun or shade that is endemic to North Central Texas (meaning it's only found here naturally) is Pale Leaf Yucca, or Yucca pallida. It's similar to its Central Texas cousin, Twist Leaf Yucca. Pale Leaf Yucca's leaves are a bluish hue with yellow margins (edge of the leaf.) It's evergreen, so when many of your perennials are dormant in winter, this small shrub would make a great focal point. It sends up a cluster of white blooms and -- perhaps the best characteristic according to parents or grandparents of small children -- its leaves will not impale you. The tips are a bit pointy but the leaves are malleable. The blooms attract hawk-bill moths; native plants offer food and/or shelter to native species of birds, butterflies, hummingbirds, and other wildlife.

This summer we planted 500+ Pale Leaf Yucca in commercial projects in Fort Worth. Full sun, sandy soil, bellowing hot wind, no consistent maintenance. Hottest, driest summer in...you get the picture. The only lost souls were those that were OVERwatered. After adjusting and readjusting their irrigation system, we have only replaced a few plants. Now that's dummyproof.
Posted by About NATIVEDAVE.COM! at 9:12 AM